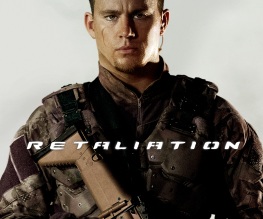 “The world’s greatest evil emerges again,” announces a brand new TV sport for the upcoming G.I. Joe: Retaliation. Well yes, we’ve known about that at least since the movie was due to be released on 29th June 2012. For reasons disputed hotly online, but ostensibly to allow new 3-D scenes to be shot, the sequel is set instead to be released on 27th March.

Paving the way comes the 30 second spot above, from which we can glean a little more information than previously available.You may have spotted Jonathon Pryce looking evil and commanding while boasting about having the power to render “entire cities obliterated at the click of a button,” in much the same style as he did in Tomorrow Never Dies. If you watched closely you will surely have noticed Bruce Willis sternly firing a few rounds off from an automatic weapon, much as he’s always done, and is doing at the minute in A Good Day to Die Hard. Dwayne “The Rock” Johnson is there, and actually says “Hell Yeah,” one of his famous lines when he was a professional ‘sports entertainer’. So there’s nothing terribly new in this piece by the looks of things, which is great if you like your blockbuster fare predictable, repetitive and by-the-numbers. Let’s face it, millions of us do, so let’s just embrace it, yay!

As for the speculation about the significant release date push-back. Consensus seems to have settled on the reason being Channing Tatum, who according to reports from preview screenings got bumped off early in the original cut. Audiences scored the flick badly for that, having warmed to Tatum’s charisma recently in 21 Jump Street, The Vow and Magic Mike. Of course that matters nothing to the Paramount, more concerned to reap some of the box-office benefits of our new young star. The Vow took $145 million in the States, Jump Street $140 million. If you’re looking for another reason, don’t bother. This is the reason.

Anyhoo, G.I. Joe: Retaliation when it comes out will presumably feature more of Tatum and the Joes doing battle not only with their old adversaries in COBRA but also (surprise, surprise!) a new threat from GOVERNMENT ITSELF. In this one, the villains manage to get their evil hands of the highest office of the United States and the heroic fighting force becomes public enemy number one, hunted by former friends who don’t know the truth. Can they resist COBRA’s latest plan for world domination, and clear their names at the same time? You know they can baby!

This time round vets Tatum, Ray Park and Byung-Hung Lee are joined by Bruce Willis, Dwayne Johnson, Adrianne Palicki and Elodie Yung. G.I. Joe: Retaliation with be released in the U.K. on 27th March.