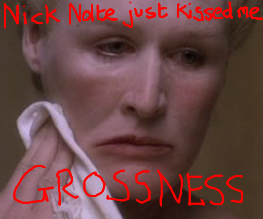 Glenn Close and Nick Nolte are set to appear in Always On My Mind, a film about an aging rock star who is diagnosed with Alzheimer’s and his doting wife. Chris D’Arienzo is both writer and director – you may remember him from such musical films as Rock of Ages, which he adapted from his Broadway musical into something “fucking dire” (so sayeth John Underwood). Hopefully this will be slightly better, despite the neurological degeneration.

Quite why anyone thought Nick Nolte might be a decent singer is beyond us, since he’s famous for sounding like the Smoking Man from The X Files. He will play the aging and increasingly-inhibited rock star with Glenn Close as his wife, who has to pick up the pieces of his shattered life. All jolly good fun, then. We all know how versatile Glenn Close is; she played the bearded pirate who got sent to the Boo Box in Hook, for instance, so we know we’re in good hands there.

Nick Nolte on the other hand? He’s a mixed bag. He was excellent in Warrior and in Tropic Thunder, and he has Gangster Squad and the guaranteed smash-hit Parker (with Jason Statham) coming out in January, but we like to hold grudges here at BFF Towers. Never forget that Nick Nolte was the voice of the gorilla in Zookeeper, alongside Kevin James. Never forget.

Hopefully Glenn Close will pull him through Always On My Mind. We’re sure that the two will have wonderful chemistry together. In the meantime, here’s a clip of Nick Nolte’s dulcet tones in Blue Chips:

Glenn Close + Nick Nolte = singing sensation? Excited for the combo in Always On My Mind?