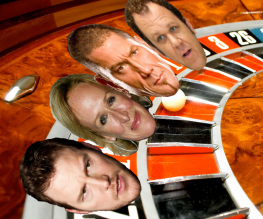 Guardians of the Galaxy, the up-coming Marvel film property that has been described as leading directly into The Avengers 2, has been trying to snap up a few big names for starring roles, and they’re all a bit random, really. This may be a sign of the characters in Guardians of the Galaxy – they’re all over the place in terms of tone or type, so hey, why not? Let’s just throw dice until we’ve got a cast.

Chris Pratt and Zoe Saldana have been definitely signed for major characters, which seems reasonable for a CGI-laden super hero knickerbocker glory of a film like Guardians of the Galaxy. Chris Pratt will be Star-Lord, one of the more popular Guardians of the Galaxy, or so the internet would have us believe. Zoe Saldana, straight off Star Trek Into Darkness, will be some sort of really attractive woman who refuses to wear clothes because she’s an alien (even though she looks like a human) called Gamora.

Let’s draw straws to see who else will be in Guardians of the Galaxy. Dave Bautista…? He’s a wrestling star, so we suppose he’s had experience pretending to hit a guy’s junk while wearing a thong, but his only other role was as the bronzed-turd bloke in The Man With The Iron Fists, which was a terrible film, and Dave Bautista was particularly terrible in it. Why on Earth anyone would give him a role in which he might have to act is a complete mystery. Dave Bautista will be playing Drax The Destroyer. Let’s hope Drax is mute. And comatose. All credit to him, Bautista could definitely nail playing a comatose mute.

Let’s throw another dart at the Guardians of the Galaxy dartboard, shall we? Aaaaaand… it’s… Glenn Close…!? Ok this thing must be broken. No? Oh well, Glenn Close it is. She’s in talks for Guardians of the Galaxy at the moment. No word what she’ll be playing, maybe it’ll be the talking tree, or the stupid raccoon, or Mantis, the sexy woman who also happens to be a gross bug. WHO KNOWS!?

That’s all that we have time for today for Ocean’s Fourteen: Guardians of the Galaxy, but… you think we need one more? Yeah OK. John C Reilly? What’s he doing nowadays? Throw him in there as, like, a hairy Agent Coulson or something. Are we done here?

So there you have it: Expect this rag-tag team of space freaks to ooze goo and mouth-impregnate you with chest-bursters when Guardians of the Galaxy hits in 2015.

Which other random actors should we throw into Guardians of the Galaxy? We’re going for Cary Elwes, the corpse of Brittany Murphy and Will Boyd, former bassist for the band Evanescence.

Previous: Like Someone in Love
Next: Man Of Steel super wrap-up