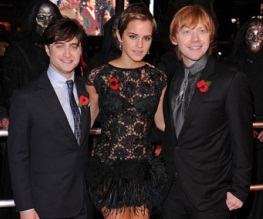 So the final instalment of Harry Potter is upon us and last night’s premiere of The Deathly Hallows drew in thousands of teenage fans, eager to catch a glimpse of their favourite stars.

The last film in the multi-billion pound franchise has an altogether darker vibe to it than some of the more family friendly films that preceded it, and a certificate to match (12A).

This sense of darkness was reflected in the clothes worn by the young actors; black suits for Radcliffe and Grint and a black vintage, ostrich feathered dress by Rafael Lopez for Watson. Outside Leicester Square’s Odeon actors were dressed as ‘Death Eaters’ and huge torches burned into the night. Even the Great British weather obliged, as the rainclouds predictably drew in and the heavens opened, soaking fans.

Though Deathly Hallows part 1 hasn’t been given the most sparkling reviews from critics, last night’s turnout is a good indicator that it’s going to be well received by fans. Mostly teenagers now, they’ve grown up with Harry as a bit of an institution and Part 2 will probably mark the end of an era for many of them. What do we think of it? Well, we’ll let you know.