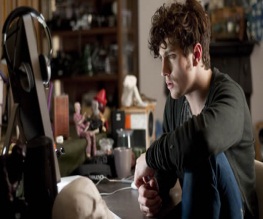 With The Social Network in cinemas now being all highbrow and award winning, the forthcoming release of Hideo Nakata’s Chatroom promises a exploitatively fun alternative, evidenced by the new poster below’s knowing smirk.

“When jaded teens Jim, Eva, Emily, and Mo meet William online, they’re seduced by his charisma. But William isn’t what he seems. He’s calculating and manipulative and doesn’t have time for people in the real world. Jim is vulnerable and has no idea how dangerous his new friendship with William will be.

As Eva, Emily, and Mo try to save Jim, William begins a terrifying game of cat and mouse, chasing them across the Internet, shutting down their systems and cutting them off from his victim. Fantasy meets reality when William and Jim are face-to-face in rush hour on the underground. Without the faceless security of the online world, everything becomes real. It’s now a race against time to save Jim, but the clock is ticking… and we fear someone must die.”

Boasting 1998’s unrivalled Ringu on his resume, the peerless Hideo Nakata is a master of his art, his art being tense and affecting horror. Chatroom looks set to add to his impressive filmography, Johnson again shining in another meaty lead role. Welcome to the anti-social network indeed.

Previous: Is Spider-Man to draw more than just its director from (500) Days Of Summer?
Next: Harry Potter Deathly Hallows premiere