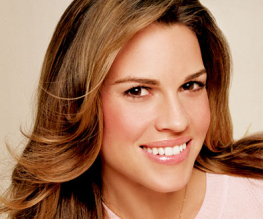 Despite 2007’s slush-fest P.S I Love You, it feels like forever since we’ve seen Hilary Swank tackle a role truly worthy of her talents. Since her breakout performances in Boys Don’t Cry and Million Dollar Baby she seems to have struggled to find parts she can really sink her teeth into, and so we were pleased to hear that she has just been announced as the lead for a new feature titled You’re Not You.

The film will focus on a young woman suffering with Lou Gehrig’s disease (played by Swank) who develops a relationship with her assigned care-giver. The part of the care-giver has yet to be cast but Nights In Rodanthe ‘s George C. Wolfe has been named as the director for the project.

Hilary Swank has a few other irons in the fire, having just been confirmed for HBO TV special Mary & Martha, and with another role alongside Meryl Streep in Tommy Lee Jones’ The Homesman, it looks like we’ll be seeing a lot more of the gifted actress on our screens. Hilary Swank delivered some pretty unbeatable performances early on in her career, but we’d like to think she hasn’t hit her peak yet. We believe in you Hilary!