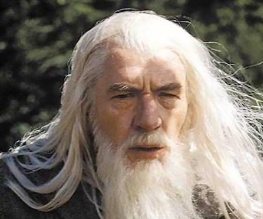 Sir Ian, how could you bamboozle us so? Last week we reported that filming of The Hobbit would finally be getting underway around July, based on a confident assertion by the wizard with the mostest. It seems that Gandalf’s powers are waning however, as today it’s been reported that filming won’t be starting until the end of the year. And possibly not even then. Sigh.

The delay stems from MGM’s massive amounts of debt. The studio are struggling to sell off parts of their company in order to remain afloat, and until they do it seems that all their big-budget flicks wont be getting off the ground. Originally, the two-part Hobbit films were supposed to be released in December 2011 and 2012, but at this stage that seems pretty unlikely.

Hang in there guys! We still have faith in you. Whew, all of this trouble makes Frodo’s trip to Mordor seem like a stroll round the park… More news on this as we have it, check back soon!

Previous: Jolie To Play Maleficent?
Next: How To Train Your Dragon