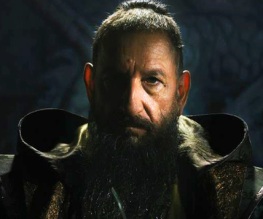 As some of you may recall, Tony Stark had rather a busy summer. The 753rd savior of movie New York has been feeling a little blue after all the ruckus caused in Avengers Assemble, playing the mopey millionaire by day and having nightmares when he manages a night’s sleep. Will Iron Man 3 eschew the usual pyrotechnics in favor of an intimate study of the dark pitfalls that lie the other side of personal and professional glory?

Thankfully Ben Kingsley’s surprisingly hairy The Mandarin (Someone in the wardrobe department appears to be a fan of Big Trouble in Little China) is here to prove that when it comes to heroes, “there is no such thing.” Cue Tony Stark spending most of the new trailer on the receiving end of Kingsley’s posturing.

Details are sparse, but one thing is certain if the general tone is to be believed: Iron Man 3 will be Tony Stark’s darkest hour. Epic music! Fade outs! Slow-mo! None of which gives much away, although Robert Downey Jr. does slip in a line about having a hundred enemies who would love to kill the troubled playboy. So, assuming Iron Man 3 doesn’t do the unthinkable in making good on the trailer’s dark vibes, at least we know Marvel has Iron Men 4 through 103 waiting in the wings to be made.

Has Tony Stark finally met his match? Kingsley has a history of bursting bubbles, so it’s safe to say The Mandarin will be bringing the fight right to Iron Man‘s doorstep. Or more accurately, through his window. With missiles. Let us know what you think below.