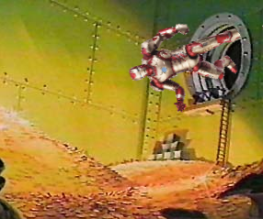 Iron Man 3 is undoubtedly one of the best superhero films of all time and the punters are responding excellently to it, forking over $195 million in the opening weekend outside of the US. For some comparison, The Avengers, one of the biggest money spinners of all time, took $185 million worldwide in its opening weekend. Soon Disney will actually be able to build its own working Iron Man Mk42, and bring the world to its heel.

Meanwhile (don’t worry we’ll get back to Iron Man in a second) Inhuman Monster Michael Bay‘s beefcake comedy Pain & Gain, starring Marky Mark Wahlberg and Dwayne ‘The Rock’ Johnson, has taken a decent-yet-underwhelming $20 million in the US for its opening weekend. Unfortunately, since the budget of Pain & Gain was only $26 million, it looks well on its way to making a profit. We’re sure every cent it makes is down to the irrepressible charm (and those pecs that just won’t quit) of DTRJ.

Considering that The Avengers is the third highest grossing film of all time at $1.5 billion (behind Avatar at $2.7 billion and Titanic at $2.1 billion. James Cameron isn’t half bad at raking it in, is he?) it would be remarkable if Iron Man 3 came close to the big boys. Give it all you’ve got, Iron Man!

It’s going to be a year of big earners, isn’t it? Have you paid for an Iron Man 3 ticket yet?