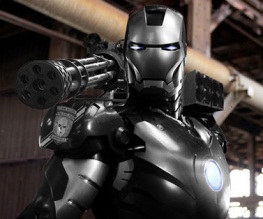 Marvel are reportedly planning a spin-off from their very successful Iron Man franchise featuring War Machine, or for those who haven’t committed both films and every comic to memory, Lt. Col. James Rhodes (Robert Downey Jr.’s best bud). Played by Don Cheadle, War Machine took on a more prominent role in Iron Man 2, helping defeat the baddies and getting to wear his own super cool Iron Man suit in the process.

You have to feel a tiny bit sorry for Terrence Howard, who played the role in the first film. Hollywood rumour mills have claimed he got bumped due to his on set behaviour in Iron Man, or because he was wait for it- the highest paid actor in the first film, and wouldn’t take a pay cut for the second. That’s right, he was paid more than Gwyneth. And Downey Jr. Strange much?

Whatever the reason, Don Cheadle proved a brilliant replacement and fully deserves a chance in the spotlight after years of fantastic supporting roles. Agree? Let us know below.