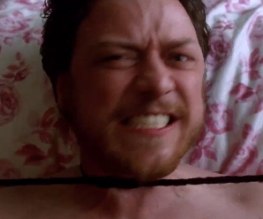 The first trailer for Filth, the big-screen adaptation of Irvine Welsh’s novel, has just arrived online – what with one thing and another, we are being bloody spoilt this week. Directed by Jon S. Baird, Filth stars James McAvoy as sex-, drug- and hate-fuelled DS Bruce Robertson, an Edinburgh detective who fills his days by planning cruel vendettas against his colleagues, abusing every woman within a five mile radius and (we hope) having an increasingly odd relationship with his tapeworm.

Baird certainly seems to have captured the glorious, frothing insanity of Bruce’s life, which spirals steadily out of control as his more understandable ambitions (make Detective Inspector, get his wife back, go to Amsterdam for all the coke and hookers his nose/cock can take) are eclipsed by his violent madness. The ordinarily debonair McAvoy looks perfect as Bruce, with support from Jamie Bell (The Eagle) as his protégé Ray Lennox, Imogen Poots (Comes A Bright Day) as politically correct policewoman officer Amanda Drummond and Eddie Marsan (I, Anna) as Bladesy, one of Bruce’s fellow Freemasons – that’s him asking about police oppression at the end. We’re particularly looking forward to meeting him onscreen, because rumour has it Bruce takes quite a shine to his tempting corpulent wife…

We’ve also been treated to a teaser poster for Filth – check it out below (click to enlarge): 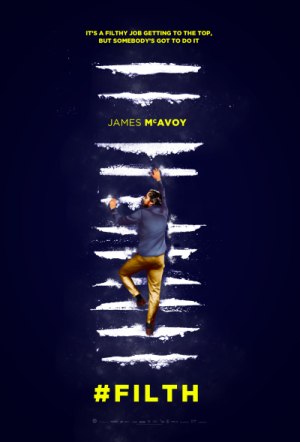 Just in case it isn’t coming across, we are SO excited about Filth – Trainspotting was an impossibly brilliant novel that spawned an iconic film, and we have every hope that Filth will be just as compelling on the big screen. If you haven’t read it, a) you’re an idiot and b) you can buy it in the Best For Film shop, so you should probably get on and do that.

Will you be seeing Filth in September? If not, get off this site.