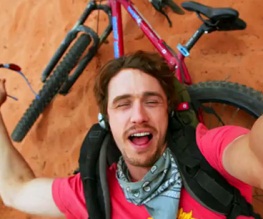 The Franco, whilst attending the Awards luncheon spoke to reporters about the pain of making 127 Hours. “There was a lot of physical pain, and Danny Boyle knew that it was going to cause a lot of pain,” he said. “And I asked him after the movie, ‘How did you know how far you could push it? I had bruises, scars… and there were shots of my bare arm, and it looked like track marks, and that was the Trainspotting Boyle, he got me hooked on heroin or something.”

“So I had plenty of scars. And Danny said he looks at the actor, and that the actor will say when it’s too far.”

Alright, calm down, Franco. Remember you were making a film about a man that CUTS OFF HIS OWN ARM. I’m not sure that a couple of scrapes necessitates such a proud re-telling. Franco is now in talks to make Three’s Company into a film, displaying his devotion to the beloved US sitcom by showing up dressed as actress Suzanne Somers’ character Chrissy Snow at Sundance. What won’t this man do for the love of his craft?

Previous: The rise, fall, and burial of Mel Gibson’s career
Next: Sanctum 3D