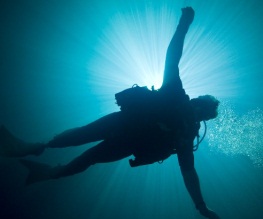 In Papua New Guinea, a group of explorers are attempting to set foot in some of the last unchartered territory on Earth – underwater caves. Whilst you and I may think this is a bad idea, Frank (Roxburgh), the gruff leader of the expedition and the rest of his crew have been exploring the Ese-ala cave system for months, certain that there is a passageway somewhere to the sea. Funding the expedition is the over-enthusiastic Carl (Gruffud), who has brought his girlfriend and Frank’s reluctant son Josh (Wakefield) along for the ride. When a huge cyclone hits the island, the surface team swiftly abandon the unlucky mortals left in the cave, who must find the river that leads to the sea to escape.

The movie uses tried and tested stereotypes from horror and action genres, with characters that are older than fossilized rock. Ioan Gruffud, who is in possession of a magnificently bad American accent, is by parts spontaneous and foolish, a capricious peacock who you long to get smothered by a rogue cave bat. Roxburgh fulfils the gruff, pull no punches role, who goes around drowning people when they start feeling a bit tired so he can complete the expedition. Straining against his dictatorship is peppy son Josh, who says quite rationally, “No-one cares about a rock”, and the two argue a bit about the relative merits of a big hole before finding a common ground in the poetry of Coleridge, as you do in a life or death situation. There is a good deal of predictable dialogue, with all the phrases that promise a swift and certain death, “we’ll see you on the other side”, “I’ll be back soon” etc., and plenty of revering of the cave as if it possessed human emotions: “the cave doesn’t care about you…to her, we’re just specks of dust.” When the cyclone comes along with a bunch of rain that threatens to fill up the cave, people at the surface are like, ah well, computers are down so we’ll just leave without letting them know. How about throwing a rock with a bit of paper attached to it down the cave mouth? Or just shouting down the hole? A similar cruelty is displayed by the filmmakers, who use the indigenous population solely as a cut-to shot – look at the man with the bone in his nostril! – or as token guides who can be dispatched without much fuss. The 3D effects convey the claustrophobia and desperation of such an enclosed space, but a lot of the technology seems unnecessary for a whole lot of rock face and water. Honestly, if you’re the type of person who enjoys a tense underwater thriller, or just needs to be warned off extreme sports, then go see Sanctum. But be warned – it’s mostly people going, “watch out for that rock!”, and NO-ONE EVER WATCHES OUT FOR THAT ROCK.