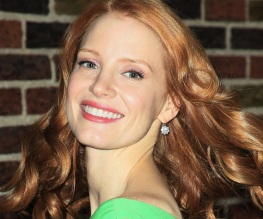 Best For Film’s current favourite actress has taken to Facebook to dispel some pervasive rumours about her introduction to the Marvel universe.

Jessica Chastain, star of The Debt, The Help, Coriolanus and pretty much every other good film from last year, was rumoured to be playing a “sexy scientist” (read: Guy Pearce‘s colleague Dr Maya Hansen) in the post-Avengers threequel. However, it turns out her schedule is just too “jammed packed (sic)”: Much though we love any excuse to swoon over Jess, going from an Oscar nomination to playing just another improbably pretty scientist in a blinding white coat wouldn’t have been an overly dignified career move. Fortunately for director Shane Black, his villain Sir Ben Kingsley is demonstrably less discerning (Prince of Persia? DUDE.) and has confirmed his involvement with Iron Man 3 in an interview with Superhero Hype. You win some, Shaney boy, you lose some…

Are you glad to see the back of Jessica Chastain? Not like that, you reprobates.

Previous: James Cameron to only make Avatar films forever
Next: Will Ferrell takes on Zach Galifianakis in 2 clips from The Campaign