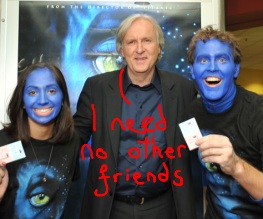 Piranha II: The Spawning director James Cameron has decided that he never wants to make any more films ever unless they’re about his ridiculous racist blue cat/monkey allegories and their silly little extraterrestrial lives. Good-oh.

In an interview with the New York Times, Cameron explicitly stated that he has no further interest in producing other people’s films (so that means no more Point Break, Solaris or Volcanoes of the Deep Sea) and makes the fairly bold claim that his hopelessly derivative Na’vi saga has the capacity to express every worthwhile point he could ever want to make.

” Last year I basically completely disbanded my production company’s development arm. So I’m not interested in developing anything. I’m in the “Avatar” business. Period. That’s it. I’m making “Avatar 2,” “Avatar 3,” maybe “Avatar 4,” and I’m not going to produce other people’s movies for them. I’m not interested in taking scripts. And that all sounds I suppose a little bit restricted, but the point is I think within the “Avatar” landscape I can say everything I need to say that I think needs to be said, in terms of the state of the world and what I think we need to be doing about it. And doing it in an entertaining way. And anything I can’t say in that area, I want to say through documentaries…”

Oh yeah, that’s the only other thing he’s going to do – make more underwater documentaries. Brilliant.

Have you learnt nothing from George Lucas, Cameron? Your producing partner Jon Landau had some rather pointed things to say about the Star Wars supremo when we met him earlier this year… perhaps he could help guide you through this dark patch. Surely you have more to offer the world than politically motivated Smurfs and very serious films about fish?