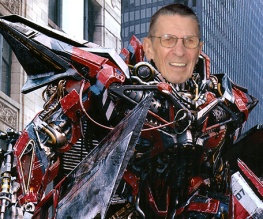 Just when we thought the Transformers franchise could sink no lower, it did; Michael Bay has announced that Leonard Nimoy is to voice a character in the forthcoming threequel Transformers: Dark of the Moon.

The actor, best known for playing Star Trek‘s Spock since time immemorial, will be voicing ultimate Autobot Sentinel Prime, who is apparently Optimus Prime’s brother despite them being bloody robots.

We don’t really care, obviously, unless he somehow manages to get this into the final cut:

Previous: The Hangover 2 full trailer revealed
Next: Keira Knightley and Steve Carell to fall in love