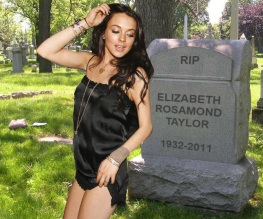 Rumours that Jesus Christ is to resign from his position as Prince of Peace and Saviour of all Mankind, citing “you fucking people”, have gathered strength with today’s news that Lindsay Lohan has been confirmed as the star of a made-for-TV film about legendary screen siren Elizabeth Taylor and her tumultuous relationship with Richard Burton.

The Oestrogen Network film, formerly called Elizabeth and Richard: A Love Story but now simplified (presumably for the benefit of its monosyllabic, toothless, meth-addled ‘star’) to Liz and Dick, is to begin shooting in June despite the fact that no director has yet decided he is sufficiently tired of the respect of his peers to become involved. However, Christopher Monger – writer-director of The Englishman Who Went Up a Hill But Came Down a Mountain, don’t you know – has no such qualms and will be producing a script.

We don’t want to write any more. This may be the end of Best For Film, of the Internet – fuck it, perhaps of life as we know it. What on earth’s the point, gentle reader, in persevering with our small lives if shit like this is going to happen anyway?

It’s been nice knowing you all.