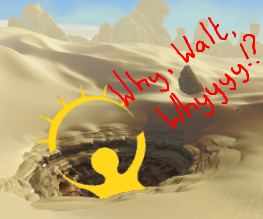 LucasArts, the game developing subdivision of LucasFilm, has been axed (lightsabered?) by new owners Disney, in a move to hand out the franchise of Star Wars games to out-of-house development teams. Our hearts go out to the 150 or so talented employees now out of work, but the closure may be the opportunity for a more diverse selection of Star Wars games.

LucasArts have delivered some real gems in their 31-year history; Star Wars: Battlefront, Star Wars: Rogue Squadron… and yeah that’s pretty much it. All the other great Star Wars games (LEGO Star Wars, Star Wars: Knights of the Old Republic and… yeah that’s pretty much it too) were developed out-of-house. The future of the two Star Wars games that were in development at LucasArts is now in question. Neither Star Wars 1313 nor Star Wars: First Assault were very far along, so there’s a great possibility that both will be lost down those massive garbage chutes on Bespin.

In recent years LucasArts have lacked creativity, throwing out as many mediocre titles as they could churn out, such as the disappointing Star Wars: The Force Unleashed games.

You could argue that the best games to have come out of LucasArts were in no way Star Wars related. Who could forget the 3D Pinball game included with Windows XP? Or Pipe Dream, the classic plumbing simulator? LucasArts must also be remembered as the studio that gave legs to the much-loved Monkey Island series. Chances are most of us won’t notice any particular difference in our Star Wars gaming experiences, except that we can finally pave over this complete fiasco:

You know what? Screw you, LucasArts. You rot for 1000 years in that Sarlacc Pit for making poor Han Solo move like that.

What were your favourite LucasArts games? Let us know in the comments below!

Previous: Are multiplex cinemas better than indie cinemas?
Next: Richard Linklater To Walk In The Woods?