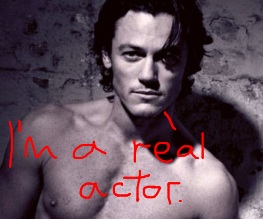 Universally underwhelming actor Luke Evans has been offered the role of the as-yet unnamed villain in Fast and Furious 6, the sixth film in the Fast & the Furious series. That may seem like an obvious thing to spell out, but please bear in mind that these things aren’t as obvious to people who actually like the franchise. Ever noticed that they wear a lot of Velcro? (Sorry, Papa Neish.)

The poor man’s James McAvoy, recently spotted being bloody awful in Immortals, The Three Musketeers and Tamara Drewe, was offered the role after Jason Statham was too busy being a LAD elsewhere – apparently the sixquel (ugh) is to be set somewhere in Yurp, thereby necessitating a non-American bad guy.

It has also been confirmed today that franchise stalwart Michelle Rodriguez (Machete) will be returning for Fast & Furious 6, or F6st6Furi6 or whatever they’re going to call the damned thing. Seriously, chaps, how many films can you make about Vin Diesel driving things?

Previous: WIN! The Tim Burton Collection on DVD
Next: Orange(Wednesday)s and Lemons #68