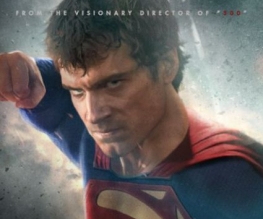 Zack Snyder (300) is bringing Superman back to our screens next summer in Man of Steel, and though we’ve thoroughly bitched about the choice of one of the wettest heroes in DC Comics canon, these two new trailers – best viewed consecutively – show a reworking of Superman’s background that we have to admit, is actually very compelling.

Father no. 1, adoptive father Jonathan Kent (Kevin Costner) gives a Biblical-style voiceover about the difficult choice Clark (Henry Cavill) has ahead of him, and then Father Dos, biological father Jor-El (Russell Crowe) starts in equally sagely to his little dollop of kryptonite about fate. Instead of playing this Jeremy Kyle-esque situation for paternity-test-themed laughs, Snyder’s gone the deadly serious route; combined with the saccharine care taken in putting the scenes together, their muted blue-grey colour palette, as well as the sweeping shots of nature at its quiet coolest, this film will be no Iron Man.

Whether or not we like this approach is still debatable; at heart, we at BFF Towers are no more than explosion-hungry CGI junkies when it comes to our comic-book blockbusters, because superheroes are inherently silly; that sense of fun is one directors have always had to maintain, at the expense of the gravity of their plot/character development – it’s entirely possible that Man of Steel is simply overambitious.