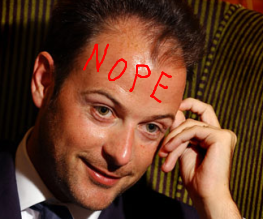 Apparently worried that a knock-off script would steal their idea (everyone is Hollywood is an absolute shit, apparently) Michael Vaughn is chugging ahead with his own special pet project. The Secret Service will reportedly be about a secret agent who kidnaps a kid off the street and teaches him to murder people for the good of a faceless government agency.

Despite our temptation to compare the plot of The Secret Service to Obi-Wan’s rather quick seduction of the young and nubile Luke Skywalker, we’re sure that Matthew Vaughn had no intention to blatantly rip-off Star Wars Episode IV: A New Hope.

It’s all a bit of a shame really, imagine a Star Wars film in a pair of competent hands like Matthew Vaughn’s again. We haven’t had that since The Empire Strikes Back. Still, there’s always Episode VIII or IX. Here’s looking to you in 2017, Matthew Vaughn!

No Matthew Vaughn! He’s gone off on some damn fool idealistic crusade. Who do you think might step in to save our Star Wars?