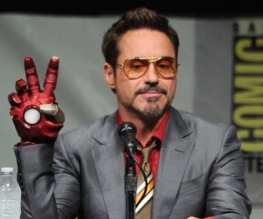 Everyone’s favourite war criminal-turned-techie-badman is back on board for Iron Man 3, and we’ve got pictures! Behold, some lucky bitch who gets to hitch a ride on an airborne and restrained Robert Downey Jr., and have it recorded in close-up HD for posterity/her wank bank. Other than now being able to die happy, the woman is accompanied by several other wired individuals who look decidedly less pleased to be there than her – philistines. 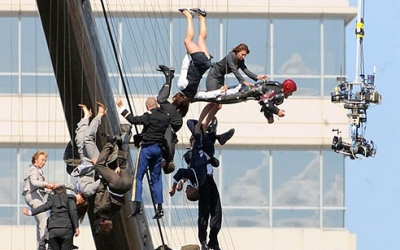 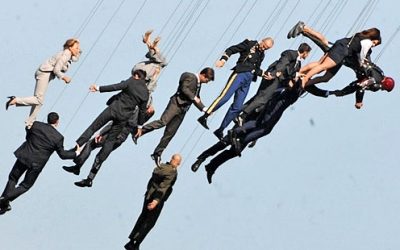 It would appear that the people being toted along by Tony Stark are members of an air crew, which opens up some good-old-fashioned theorizing possibilities. The presence of air-stewardesses indicates a plane might have blown up, but then there’s a decorated military officer; this could be Air Force One. Ben Kingsley’s character, Mandarin, is the Big Bad in Stark’s chosen holiday destination, China, and that land of consumerism is a special choice in itself, with Stark’s history of multi-billionaring off other people’s destructive desires for sport. Whatever; it’s COOL and we’re REALLY REALLY EXCITED.