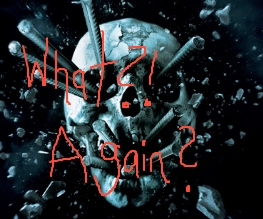 There’s not a lot you can say about a skull with nails in its face. If anything, it raises more questions than it answers. The film’s logline “Death has never been closer” is another cracker though, up there with “Rest In Pieces”, “This Ride Will Be The Death Of You” and “For Every Beginning There Is An End”. Again the film will be in glorious, gory 3D, though it will mark the directorial debut of Steven Quale. Could he be a brave, new voice in the landscape of cinema? Not bloody likely. The film is scheduled to hit our cinemas on the 26th August. Do something else that night yeah?

So whaddaya think? Do you care? Convince us this is a film worth seeing!

Previous: Bryan Cranston in MORE talks
Next: Five Trailers That Are Better Than The Movies They Tease