New poster for Titanic gives away the ending 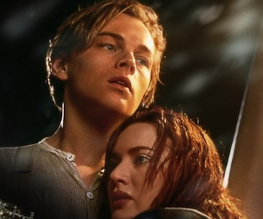 Boats! Kate Winslet! Leo before he got good! Tragedy! The vague air of an erection! All this and much, much more await your Titanic-poster-gazing eyes. Hot on the profoundly underwhelming heels of The Phantom Menace 3D, we’ve got another remastered classic poised, ready, and about to sail directly into the iceberg of your face.

Yep, Titanic 3D is set to hit our screens in April, and we couldn’t be more violently ambivalent. For those of you who always felt there was a dimension missing that wasn’t just ‘being historically accurate’, your ship has come in. But we wouldn’t board it, if we were you. BOAT PUNS AHOY! THAT’S LITERALLY ANOTHER ONE! Anyway, here’s a poster, go mad: So it looks like it sinks then. The more eagle-eyed among you may have spotted that it looks an awful lot like the other poster released recently, and to those people we say – yes. Yes it does. But how much effort exactly are you expecting from a money-spinning re-release?

Anyway, we’re all sure it will look very nice and big and pointy and tragic. We’re pretty excited, can you tell?