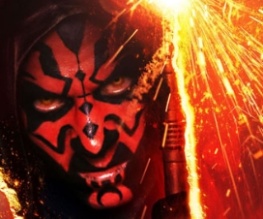 Thirteen years after it blazed into my life to provide me with a new all-time favourite thing (lightsabers, which stayed in the top spot until I discovered breasts in 2005), Star Wars Episode I: The Phantom Menace is heading back to cinemas to hammer home the fact that it was actually really shit and I only enjoyed it because I was a pathetic friendless whelp. And just for funsies, it’s now in 3D.

Anyway, there are some new posters. Click them if you want, they get bigger and that:

Well done, George. You’ve grasped the fact that the only thing that’s better about the new trilogy than the originals is the fighting, so all the posters are now lightsaber-based.

The Phantom Menace 3D is out on February 9th. More importantly, lightsabers or breasts? Cast your vote below!