New still from Fincher’s Girl With The Dragon Tattoo 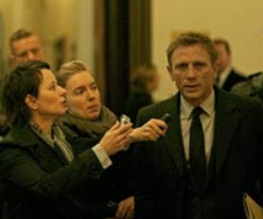 We’re coming up to a month before the official release date for David Fincher’s Girl With The Dragon Tattoo, and whilst we’ve been pretty loaded up on mega-stylish, super-action-pumping trailers , it’s also important to remember that at its root this is a tale of investigative journalism just as much as it is murder and exciting clothing.

In a new still we can see Mikael Blomkvist (Danny Craig) getting all harassed by journos after being slammed for printed an untruthful article – it’s this that leads him to Henrik Vanger (Christopher Plummer) and his quest to solve the mystery of his great-niece’s disappearance. Take a look: Look at all those serious suits and efficient haircuts. And they look like pretty serious documents he’s carrying, don’t they? Full of libel. Ah the blood-thirsty press, eh? The double-edged sword of – yeah alright we don’t have that much to say, it’s a picture, take it or leave it.