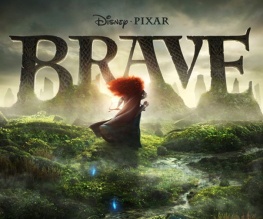 Pixar has released two new stills from their next release, Brave. The film – which is due for release next June – tells the story of Merida, a Scottish princess (voiced by Kelly Macdonald) who is skilled at archery and who defies the customs of her land. Merida runs away from her parents (Billy Connolly and Emma Thompson) and is granted a wish by an old witch (Julie Walters) which goes wrong or something. We’re a bit confused by the plot this early in the morning but look! Look at the pretty pictures! (Click to go large and in charge).

The first still shows Merida encountering a Will-o’-the-Wisp (FYI also known as a “hinkypunk”, “corpse candle”, “spook-light”, “friar’s lantern” or “ghost orb”). It looks really cool and shiny and maybe a bit scary. Don’t get too close to the spook-light, Merida!

The second still is of three guys who don’t look very happy (especially that middle one – oof! Someone’s cranky!). We think these are probably the Scottish lords who are angry with Merida’s behaviour – Lord MacGuffin (Kevin McKidd), Lord Macintosh (Craig Ferguson), and Lord Dingwall (Robbie Coltrane).

So this all looks in order. Beautiful animation, good characters, lots of Scottish people. It will most likely be amazing and will make everyone in the cinema weep and then go home and put their status as “omg just cried at Brave! So good!”.

Are you all as excited as we are? Let us know!

Previous: New The Hunger Games trailer is here
Next: Robert De Niro is back to the drama in Being Flynn