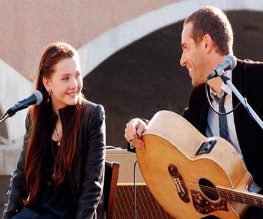 It’s always nice to watch child actors grow up, and you certainly get the feeling that Hollywood is getting better at handling the transition. We’ve seen Dakota Fanning, Chloe Moretz and the Potter kids evolve into nice precocious teenagers, unscarred by any rehab stints or unwelcome Lindsay Lohan influences. It’s time to welcome Little Miss Sunshine’s Abigail Breslin into the fold, as she plays her first bonafide teen role. And she even seems pretty decent in it.

Janie Jones tells the story of a struggling middle-aged rockstar (Alessandro Nivola) who discovers he has a thirteen year old daughter by the skanky-looking Elisabeth Shue (seemingly reprising her role in Leaving Las Vegas). What follows appears to be classic popcorn. Breslin is handed over to her no-good father, bonds are formed, songs are sung. It’s basically Crazy Heart with added pre-pubescence, but worse things have happened. We get the feeling that Abigail Breslin is going to be a major player in the next few years, so it may be worth a watch.

Will you be seeing Hollywood’s latest estranged father/angsty daughter flick? C’mon, you loved The Last Song.

Previous: Madonna’s W.E sinks without trace in Venice
Next: Don’t Be Afraid of the Dark