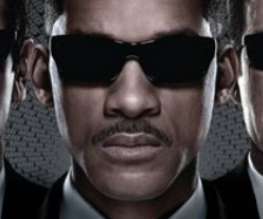 Up till now we’ve been tentatively – some may say delusionally – excited about Men In Black 3. Sure, we all heard the rumours about scripting issues, budget problems, the fact that Will Smith had a really smelly trailer or something, but hell, this is MiB we’re talking about. The first, last and only line of defense against the worst scum of the universe – we have to show a little faith, right? Yeah. Well having just watched the second trailer, we’re rapidly running out of hope.

OK, so, things wrong with this trailer:

– If the most hilarious bit of slapstick is an Asian lady being all hit in the face, then this isn’t the happy-go-blasty franchise we thought it was.
– “So there are some secrets out there the universe don’t know about?” – That just doesn’t make any sense, Will. It doesn’t make sense and you know it.
– “First, we gotta get high” – TWO DIFFERING MEANINGS OF THE WORD HIGH! FAMILY FRIENDLY MEANING IS THE REAL MEANING PHEW! Is this the pithy dialogue we’re to look forward to?
– The horrifying PG-friendly smack-talk: “I don’t have no problem pimp-slappin’ the shiznit outta Andy Warhol.” Pimp-slappin the… we don’t even…
– The bizarre absence of any climax whatsoever; “we’re running out of time… we’re running out of clues… there’s an invasion coming… so… we need to go, right now”. YOU NEED TO GO, RIGHT NOW? WHAT KIND OF ALIEN-BUSTING BATTLE CRY IS THAT?

Thing is, we can’t help but notice that we’re yet to get any idea as to the actual plot of MiB 3, save “J has to go back in time and it’s well lolz”. Sure, Josh Brolin does an excellent Tommy Lee Jones impression, but surely the entire storyline doesn’t hang on that one fact, right? RIGHT?

Emma Thompson is still in it, though. Is that enough of a reason to be excited?