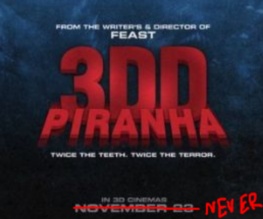 Well, this is a surprise. Despite its predecessor‘s financial success, boobs’n’gore sequel Piranha 3DD is to head straight to HMV without a theatrical release in the United Kingdom.

Despite weathering criticism from James Cameron (who would rather we forgot about his 1981 debut Piranha II: The Spawning), Piranha 3D took a respectable £4.5m or thereabouts at the UK box office when it was released in 2010. The sequel was originally due out in November but will now be available on DVD and Blu-Ray from March 19th.

There’s no word from distributors Entertainment Film Distributors (imaginative name, that) on why this decision has been taken, and as yet nothing on whether the planned US release will be altered. Piranha 3D made an $84m return on its $24m budget, so the boys at the top must be confident of healthy UK DVD sales if they expect to coax similar profit margins out of the $20m-budgeted sequel.

Do you know anything more about EFD’s decision to can Piranha 3DD‘s theatrical release? Let us know below!