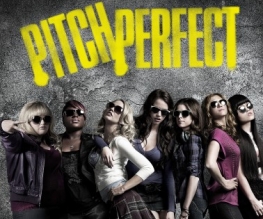 Pitch Perfect might just be the first film to do the Glee thing properly since… well, the first series of Glee. Best For Film isn’t generally a fan of snarky comedies about failing musical groups trying to make it in the cut-throat world of [insert niche musical form here], assembling a superficially ill-matched team of misfits to scrape through regionals and finally take on [better-dressed, more polished musical group] in the Final of whatever thing they’re doing. Joyful Noise? Woeful Racket, more like.

So why is Pitch Perfect, a film about warring a cappella groups with stupid neckerchiefs and names like ‘The Bellas’, different? We don’t know, really – it’s not just because we fancy Anna Kendrick a bit, honest. Having Avenue Q creator Jason Moore at the helm doesn’t hurt, and nor does a dose of Antipodean Melissa McCarthy-lite Rebel Wilson (“I’m Fat Amy!” “You call yourself Fat Amy?” “Yeah, so twig bitches like you don’t do it behind my back.”) But… doesn’t Pitch Perfect just look a bit more coherent than the usual tween fare?

Have a look at the new clips, then we’ll talk:

D’you know what? We’re sold. The performances look like they range from solid to solid gold (we do love you, Christopher Mintz-Plasse), the script sounds even better and the songs are, frankly, fucking ace – although a quick chat with the rather more in-touch BFF interns suggests that it’s really not okay to enjoy Flo Rida, even when he’s been a cappellified. A fresh, funny, energetic female-led comedy with more brains and less vomit than The Hangover? Pitch Perfect might be the film that everyone (wrongly) said Bridesmaids was going to be.

Are you looking forward to Pitch Perfect? Let us know below!

Previous: A Knight’s Tale to become TV series
Next: The Campaign