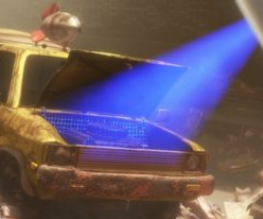 The Toy Story Pizza Planet truck has become a running joke with Pixar makers since they re-used it in A Bug’s Life. During a Q&A for Brave John Lasseter said “we had to beg, borrow or steal whatever we’d already built so it started there because we needed that vehicle”.

Since then the truck has appeared in all Pixar feature-films apart from The Incredibles (though it does appear in the video game). Lassester said it will even appear in the new feature Brave – and he will give $1 million to any viewer that spots it taking a drive through medieval Scotland.

Keep your eyes peeled! Even if it is only “Play money, Goofy dollars” that director Mark Andrew is offering.