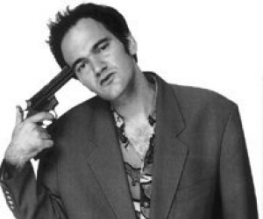 Quentin Tarantino. We don’t know whether the reaction that name will engender in the majority of you will be a positive or a negative one, but we know you definitely had a reaction, and we know it was a strong one. Quentin Tarantino reminds us of that friend at school everyone has growing up that was inexplicably popular despite the fact that nobody actually liked them. Usually they were a smart-ass or they had bad hygiene and were just enough of an irritant to make you spend the majority of your time together wondering why you were friends. Perhaps you’d rationalise it to yourself by recognising that they had one redeeming feature; a good sense of humour or a cool playstation they’d let you play with occasionally for example, but whatever it was it was something that somehow made it more worthwhile not to make things awkward by ending the friendship and just tolerate their presence instead.

We didn’t go to school with Quentin Tarantino but we’d bet all the money we have that he was that ‘friend’ to a lot of people.

Quentin Tarantino is one of the most needlessly inflammatory and annoying directors out there: the indulgent dialogue, the blatant rip-offs (he likes to call it “homage) of classic films, the nauseating tendency to insert himself into his own features. He makes it so easy to hate him and we do but.. we also kind of love him and the news that he is releasing a 10 disc Blu-Ray compilation of all of the films he has directed for the last twenty years has us resigned to the fact that we are most definitely going to buy it.

Not only does the set contain the best of his directorial fare (Reservoir Dogs, Pulp Fiction, Jackie Brown:the works) but there are loads of extra features for film geeks to sink their teeth into. Two discs of the set are solely dedicated to unpicking Quentin Tarantino’s twenty-year long career as well as his influence on pop culture, never-before-seen interviews with cast and crew and a director’s cut of True Romance. With all that on offer there isn’t even any point in pretending we don’t want to see this. The set will be available from November 20th and, for our sins, we’re going to be standing in line to buy it with gritted teeth.