Scarlett Johansson to be stabbed in shower 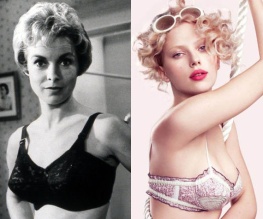 Fresh from being pointless in the new Marvel Avengers Assemble trailer, pop-eyed bitch Scarlett Johansson has got a new film to ruin! She’s been cast as Janet Leigh in Alfred Hitchcock and the Making of Psycho, Sacha ‘Anvil!‘ Gervasi’s biographical film about the production of the cult horror film – and she’s being joined in the bathroom by James d’Arcy.

d’Arcy (W.E., remember? He probably wishes you didn’t) will play Anthony Perkins (playing Norman Bates), whilst Anthony Hopkins and Helen Mirren are already onboard to star as Hitchcock and his multitalented wife Alma Reville. Black Swan co-writer John J. McLaughlin has produced a script, although he may have to take out some of the big words before Scarlett can really get to grips with it.

This seems like a strange role for Johansson, but Janet Leigh attracted her fair share of flak for taking the role of Marion Crane way back in 1960. And maybe playing an actress playing an actress will be the catalyst Johansson needs to actually do something worthwhile! We live in hope.

Previous: If Not Us, Who?
Next: Bill Murray not returning for Ghostbusters 3