Bill Murray not returning for Ghostbusters 3 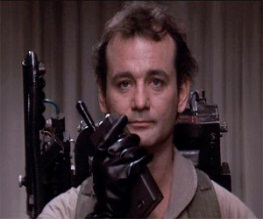 In another twist for the on-off saga that is Ghostbusters 3, Bill Murray is reportedly not interested in starring in it. Dan Aykroyd, who has been trying to get the film made for 10 years (presumably to re-ignite his stagnating career), spoke to the Daily Telegraph about Murray’s decision, saying

‘He’s a friend first, a colleague second. We have a deep personal relationship that transcends business and he doesn’t want to know.’

With a third Ghostbusters film proving to be a bit of a pain in the ass to put together, and with a fresh young cast looking set to play the paranormal exterminators, Sony are considering just rebooting the franchise. While tampering with these legendary films will no doubt incense the many who see Ghostbusters as a fond relic of the 80s, there’s no doubt that the ignorant masses would flock to see a re-make.