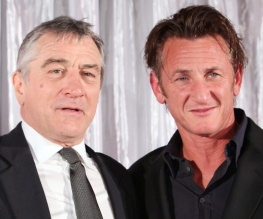 Sean Penn has announced an upcoming film project but (spoilers) this time he’s keeping his leathery face off the screen. Robert De Niro will play Jackie Burke, a comic attempting to revive his waning career whose life is ‘turned sideways’ (is that a thing?) after he meets Kristen Wiig’s character, Harmony. Word is, she’s a redhead and we all know what they’re like.

Penn’s last directorial outing was the 2007 film Into the Wild and hopefully The Comedian – which begins production in 2012 – will be a strong follow on. Considering De Niro’s recent film choices – Little Fockers, New Year’s Eve (seeing him in that trailer literally made our eyes fall out) – it is cheering to see him taking the lead in what sounds like a potentially interesting project. We predict it will be a bit like The Wrestler but more funny. And with, sadly, less Mickey Rourke.