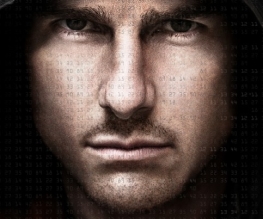 If there’s anyone out there reading this, help me. I’m one of the interns at BFF and they’ve locked me in here. They’re making me… do things. In this case, they’re making me watch the new trailer for Mission Impossible – Ghost Protocol. They broke into Yahoo with wires and computer science and hacked it into their cyber-bags, before pulling on a latex mask of King Yahoo (our intel suggested they had a king) and strolling out of the front door of the internet. Anyway, it looks really awful.

So Tom Cruise and his team have been framed for blowing up the fucking Kremlin(!) And now they have to go against their own government to find the truth. From there it devolves into gunfire, car chases and Tom Cruise falling off of things and jumping away from explosions. We’re as shocked as you are. It looks like they’re just taking everything from the previous movies and thinking “what would make it more ridiculous?”

That said, Simon Pegg is in it, being funny and British, but happy as we are he’s getting paid, even he can’t stop this train from derailing.

Previous: Sean Penn directing De Niro, Wiig in The Comedian
Next: New poster for My Week With Marilyn