Sex And The City prequel? 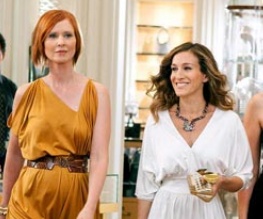 Surely not, right? Surely, Sarah Jessica, Kim Catrall et all will finally let their poor, chemical-stuffed bodies rest, freed from the wearying torment of skyscraper heels and botox nightmares. If SATC 2 has taught us anything, it’s that there’s nothing else these women can give. Or is it?

With the recent release of The Carrie Diaries – the stories of the twenty-something year old Carrie Bradshaw, rumours are rife that a prequel movie will also soon be underway. Though SATC 2 has underperformed in the States, it’s doing surprisingly well in the UK, taking £7.4 million over the bank holiday and claiming the box office top spot. Is this enough of a reason to get the wheels moving on a prequel? Fans everywhere might want to see the “before” tales of Miss Bradshaw, but may think again when they hear who’s pipped to play the role – Miley Cyrus. Yep, that’s right girls. Six series of female empowerment reduced to a tween movie starring Hannah Montana. What a world we live in, eh?

Though nothing has been confirmed – about the film or its potential star – Miley recently said in an interview that she would “die” for a part in the film about about Carrie Bradshaw’s life as a teen. She told Fearne Cotton on Radio 1: “I’d totally do it. I would die, it would be so cool.” Spoken like a true female revolutionary.

What would you make of a Sex And The City Prequel? Talk to us…