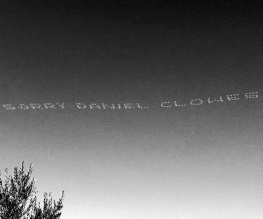 All-star plagiarist Shia LaBeouf has taken another step towards utter insanity with a New Year’s message to the artist whose work he stole.

LaBeouf’s acclaimed short film Howard Cantour.com was recently revealed as a shameless ripoff of comic book drawing man Daniel Clowes’ Justin M Damiano. His response was to plagiarise an apology from Yahoo Answers. And then, when the fuss didn’t die down, he did this:

Ask not why LaBeouf hired a skywriter in LA when Clowes lives in San Francisco. He paired his Twitpic of the absurd gesture with the following tweet:

You have my apologies for offending you for thinking I was being serious instead of accurately realizing I was mocking you.

Which, quite apart from its sentiment, has a rather interesting genesis of its own; if you care to head to the US political blog RedState.com, you’ll find it looks a lot like the closing sentence of this blog by editor Erick Erickson:

This is just getting silly, isn’t it? The sooner Shia is hospitalised for his own protection and the continued sanity of Twitter, the better.