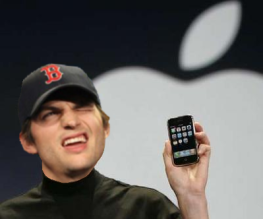 Steve Jobs is a man associated with many things – innovation, business, the computer age, hidden camera prank shows, noughties stoner comedy… OH NO, I’VE MISTAKEN STEVE JOBS FOR THE EX-FLOPPY-HAIRED-BOY-TOY ASHTON KUTCHER. Surprisingly, a mistake easier than you might think considering the eerie resemblance of Kutcher to Steve Jobs in the first official picture released today of the 2013 biopic. 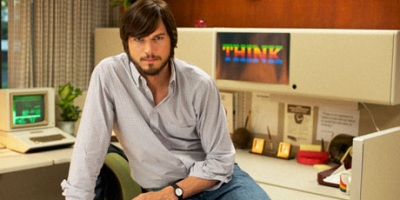 WEIRRRRD, HUH?!
Rumours have it that a second Steve Jobs biopic, scripted by The Social Network‘s Aaron Sorkin and based on the original biography by Walter Isaacson, is in the Sony pipeline for release in a few years time. So hooray and huzzah, because this means we’ll all have our Steve Jobs fill of technology and 1980s facial hair into the foreseeable future.

Whilst we have no doubt that Ashton Kutcher will rise to the challenge, who would you like to see as Steve Jobs in the potential Sorkin/Sony biopic?