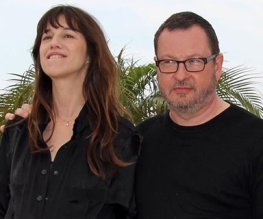 A couple of months back we reported that Lars Von Trier was going to team up with his favourite little genital mutilator Charlotte Gainsbourg for a film entitled Nymphomaniac – well guess what? IT’S STILL HAPPENING. An official synopsis has been released, and it looks to be a tongue-in-cheek romp through a joyful field of sexual awakening. Lol jk it’s going to be fucking horrible, obviously.

On a cold winter’s evening Seligman, an old bachelor, finds Joe semi‐unconscious and beaten up in an alleyway. After bringing her to his flat he sees to her wounds while trying to understand how things could have gone so wrong for her. He listens intently as she over the next 8 chapters recounts the lushly branched-out and multi faceted story of her life, rich in associations and interjecting incidents.’

To be fair to Von Trier, no matter what you make of his creative output, there’s no denying that he’s always worthy of being talking about (NAZIS NAZIS NAZIS). Last year’s Melancholia was certainly one of the more original and ambitious dramas of 2011, with Gainsbourg on wonderful form (does she have any other type of form?).

So the question now is whether Von Trier is going to stick with his credo of releasing both a hard-core and a soft-core version? And perhaps, more pertinently, who on earth would bother with the soft one? Stay tuned, sexual-deviance lovers!

Previous: First poster for Steve Carell and Keira Knightley apocalyptic comedy
Next: Why you shouldn’t see Star Wars: Episode I in 3D