The Dictator Gets A Poster 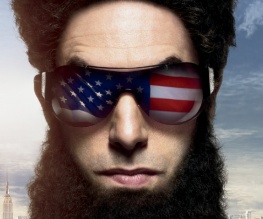 Are you looking forward to The Dictator yet? We’re pretty intrigued by the new Sacha Baron Cohen flick, which promises to “tell the story of a dictator who risked his life to ensure that democracy would never come to the country he so lovingly oppressed.”

It’s totally rumoured to be based on Gaddafi too, which makes it educational. Education is always good, guys! Education lets you LEARN ABOUT STUFF! And ‘stuff’, in this case, is the wildly oppressive nature of totalitarian states.

Let’s have a gander at that poster then, shall we? For educational purposes… So that doesn’t really tell us anything. We get Aladeen (Cohen) looking stern against a fab New Yorkian backdrop… and that’s about it.

Although that doesn’t really come as a surprise. A lid has been tightly closed upon The Dictator (which is more than can be said for the lid on top of “Kim Jong Il’s urn” at the 84th Academy Awards) and we don’t really know very much more than the trailer allows us.

We know it’s a departure from Cohen’s usual style. It’s not a mockumentary, for starters, it’s a bona fide film. And it even stars real actors and actresses, like Anna Faris, Ben Kinglsey and John C. Reilly! And it has a proper script… WE JUST DON’T KNOW WHAT IT SAYS YET!

There. Now you know everything we know. You, my dear, are as knowledgeable as the almighty powers nestled within the high stone walls of BFF Towers. How does it feel?

The Dictator is hitting our screens in May; will you be heading off to the cinema?

Previous: The Pirates! In An Adventure With Scientists
Next: Cheat Sheet: James Cameron