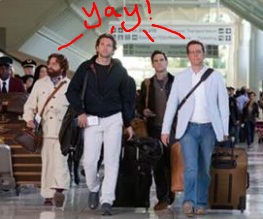 The second and third lawsuits to be levelled at The Hangover Part II distributors Warner Bros. since its summer release have been dropped.

As sad sacks with nothing better to do may recall, aspiring screenwriter Michael Rubin and Ed Helms’ stuntman Scott McLean separately sued Warner Bros. for, respectively, stealing Rubin’s shit script and breaking McLean’s head. They’ve both quietly packed up and pissed off after it became apparent that a) Michael Rubin’s script Mickey and Kirin sounded like the worst thing ever and b) Scott McLean has really stupid dimples. Case closed.

In fact, the quarter-billion-dollar grossing movie has brought its makers more than their fair share of strife. Earlier this year, Warner Bros. faced another awkward situation when tattooist S. Victor Whitmill (who gave Mike Tyson his ghastly facial tattoo) claimed that the scribble borne by Ed Helms’ character Stu through most of the film constituted a copyright violation. A judge acknowledged that although the distribution company was clearly at fault, the trouble and expense involved in blocking The Hangover Part II‘s release would be disproportionate to the severity of the offence. Whitmill was later paid off.

What’s next – a suit from the Westboro Baptist Church on the basis that God Hates Fags (and Zach Galifianakis)? We’ll keep you posted…

Previous: The Scarlet Blade
Next: What can we learn from the Dark Knight Rises trailer?