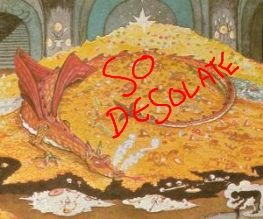 With any luck, you’ve all got over the slightly unwelcome news that The Hobbit is being stretched into three films; it’ll be a bit unnecessary, sure, but once we get us some quality dwarf action we’ll all be gagging for a few extra hours with Gandalf and the gang. However, even if two films’ worth of story can be turned into a trilogy there’s no way the same can be done with two names. The Hobbit: An Unexpected Journey and The Hobbit: There and Back Again are still intact, fear not, but the new Part 2 has warranted a freshly-minted and utterly incongruous title. Say hello to The Hobbit: The Desolation of Smaug.

We’re going to have to say that again, we just love it so much. So there’s An Unexpected Journey, in which the dwarves eat all Bilbo’s cake and are comically short and clumsy. There’s There and Back Again, which makes us all feel warm and fuzzy when we mentally suffix it ‘a Hobbit’s tale, by Bilbo Baggins’. Oh, and now there’s THE DESOLATION OF SMAUG, in which Smaug is either the cause or the focus of desolation. Keep it light, Pete – will Smaug be desolating Dale and Laketown, or will he be left desolated by the discovery that the Companions aren’t actually coming over for some companionship and to admire his shiny waistcoat? Or is he just miffed about basically not being in the first film?

What do you make of THE DESOLATION OF SMAUG?

Previous: The Oogieloves (?) score worst US opening weekend of all time
Next: Top 13 awesome fight scenes in film