The Hobbit: The Desolation of Smaug new image arrives 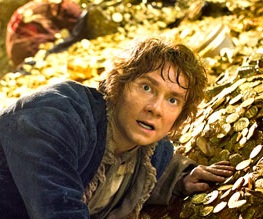 The Hobbit AKA Bilbo Baggins AKA Martin Freeman will finally embark on his Unexpected Journey this Thursday. To mark the occasion, we’ve been granted a new still from next year’s Desolation of Smaug to remind us that it’s only the beginning of a very long trip. Stretching J.R.R. Tolkein’s relatively modest children’s book into a weighty three-part epic, Peter Jackson has been nothing if not thorough. Click to enlarge: 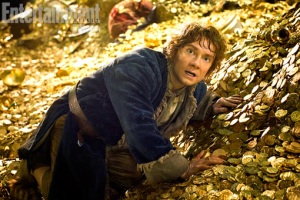 We won’t get much of a look-in at notorious gold-hoarder and full-time dragon Smaug this time round, but this new still should leave no-one in doubt as to his sizable nest egg. Perched atop the fire-breather’s pile of gold and wearing what appears to be Jamie Foxx‘s Django outfit, Martin Freeman looks suitably stunned as he looks past the camera at some unknown entity. We’re guessing the set housed his Sherlock co-star Benedict Cumberbatch engaging in some natty dragon cosplay, but the finished product will undoubtedly be delicious, cornea-melting CGI.

Some time spent in Smaug’s bling cave should prove a welcome change of pace after An Unexpected Journey‘s re-introduction to the Shire and Bag End, so there’s some extra-special anticipation reserved for part deux of Jackson’s epic tale. We’re not saying we have Hobbit fatigue before we’ve even glimpsed Bilbo’s familiar round door, but if there’s one thing we’re looking forward to, it’s the goddamn dragon.