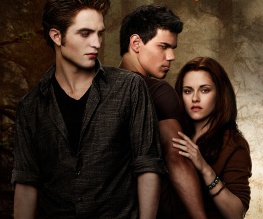 Twilight: Eclipse , number three in the four book series has just finished shooting, and the team’s attentions are now turning to the final chapter: Breaking Dawn. In the style of Harry Potter and the Deathly Hallows, team Twilight are planning to break up the story into two films, in order to really do credit to the tale/make loadsa dosh.

The only problem is that the cast have only been contracted for four films, and you’d imagine that the beautifully cheekboned lot are savvy enough to see how much they could potentially charge for the extra filming. However, with the amount of cash being raked in by hysterical teenage girls all over the world, we reckon the producers could probably stretch to an extra quid or two.

Previous: Jackass 3 in 3D
Next: “The ‘Empire of the Sun’ of zombie films”