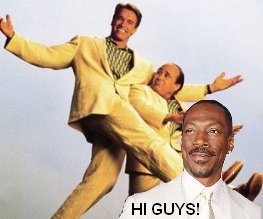 Remember the 80s movie Twins, starring Arnold Schwarzenegger and Danny DeVito as mismatched brothers? Okay. So imagine that, but called Triplets… with Eddie Murphy as the third unexpected brother.

‘Oh sure’, you’re probably all thinking. ‘The crazies at Best For Film Towers are one egg short of a full English breakfast. All these unexpected sequel announcements have addled their brains…’

But it’s true. Genuinely true. The Hollywood Reporter has confirmed that Universal will be making a sequel to the 1988 film and, yes, a pig somewhere has undoubtedly sprouted wings and taken flight.

Producer Ivan Reitman is working with his Montecito Picture Company and the studio, hoping to ensnare a down-and-out writer so that he can hash out a script. Eddie Murphy, Arnold Schwarzenegger and Danny DeVito are all confirmed and superglued to the project.

We suppose the project could fall flat on its face during the devlelopment process but, hey, all those other 80s sequels and reboots out there make it prime movie fodder.

Will you be watching Triplets? Or will you be busy storing up tinned food and bottled water for the oncoming doomsday?