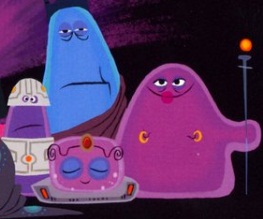 Sure we all wept manly tears of solid rocks upon watching Wall-E glide through space with his true love EVE, but would the Pixar classic have been nearly as powerful without the underlying “wasteful human existence” satire? We think not. Which it’s why its almost unbelievable that Pixar very nearly didn’t have any humans in it whatsoever.

That’s right, Disney have released some concept art showing that originally Wall-E was to stumble upon a spaceship full of blobby aliens rather than people. This race of gelatin beings were later replaced by a human race of gelatin beings, giving the film a depth that otherwise would have been lost completely. Damn they’re clever buggers over at Pixar, aren’t they?

Anyway, here are the first concept pics for your delectation. Just imagine it; we could have wandered out of that film feeling no guilt or anxiety whatsoever. And what kind of idiot wants that from a cinema experience?