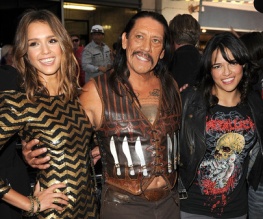 We’re about to make a pretty outlandish statement, so brace yourselves – Mexploitation sequel Machete Kills is set to be even more fucking insane than the original film, which featured Danny Trejo and Steven Seagal killing everybody in the world.

Returning director Robert Rodriguez is trying to tempt back stars Jessica Alba and Michelle Rodriguez to join Trejo and new cast members rumoured to include Michelle Williams and Mel Gibson. In case you haven’t heard much about the sequel, here’s the official blurb:

The new film finds Machete recruited by the U.S. Government for a mission which would be impossible for any mortal man. Machete must battle his way through Mexico to take down a madman cartel leader and an eccentric billionaire arms dealer who has hatched a plan to spread war across the planet with a weapon in space. Machete takes on an army in an effort to dismantle a plan for global anarchy.

It seems incredible that a film which grew out of a one-scene joke in Spy Kids and a fake trailer in Grindhouse has now grown into a franchise in its own right, but with Machete‘s impressive $44m gross it was never going to be left alone. We just hope Machete Kills can maintain the frenetic pace of the original!

Is Machete your favourite film ever? If not, why not? Answers below.