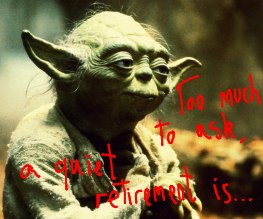 Well, this is big. According to Ain’t It Cool News, still the most enthusiastic purveyors of ellipses on the Internet, Lucasfilm producer Kathleen Kennedy is putting together a slate of proposed Star Wars films to be developed alongside the new trilogy – and a stand-alone movie starring pointy-eared grammer-ignorer, failed Muppet and Jedi master extraordinaire Yoda is at the top of her list.

Needless to say, Twitter has gone completely mental at the prospect of a Yoda film. One of the most loved figures ever to appear in the Star Wars canon, Yoda made his first appearance in 1980’s Star Wars: Episode V – The Empire Strikes Back and has appeared in every Star Wars film released since – first as a lovable puppet who trains Luke Skywalker on the swampy backwater planet of Dagobah before finally becoming one with the Force at the age of 900, and more recently as the sage and learned leader of the Jedi Council, one-time Master of Christopher Lee’s Count Dooku (ugh) and, thanks to the magic of CGI, a supremely talented lightsaber duellist. (Yoda became a master of combat Form IV: Ataru, also known as the Way of the Hawk-Bat, because its emphasis on Force-assisted acrobatics helped him compensate for his small stature. Oh god, we’re so uncool.)

We can see the logic of a Yoda spin-off. Following his death in Return of the Jedi, there will be little or no room for Yoda in the new Star Wars trilogy, barring a possible appearance as a Force ghost. And, crucially, very little is known about Yoda’s background – a rarity, given the extensive coverage that even minor characters have received in the Expanded Universe of novels, comics, video games and so on. Yoda’s species has never been revealed (although several other senior Jedi appear to be members of it). The only mention of his life before joining the Jedi Academy is a story featured in the long-defunct Star Wars Galaxy magazine back in 1996, as an Honorable Mention in that publication’s ‘Design an Alien’ competition – this has been designated canon unless contradicted elsewhere, but we’re willing to bet it’ll be scrapped, along with any bits of extant data from his 864 pre-Phantom Menace years which don’t suit the House of Mouse’s plans for Yoda. Which will almost inevitably, alas, involve a love interest.

So, then, we’ve got a memorable and merch-friendly character (there must still be, like, ten kids in the world who don’t have a Yoda backpack) with spectacular powers, plenty of potential for stunning CGI and over eight hundred years of basically undocumented life to play with. Nothing’s confirmed, but the more we think about it the more J-Men Origins: Yodarine sounds like a pretty good idea. It certainly beats the almost-inevitable Boba Fett film. We just don’t want to ever, ever see anything like this again, okay?

Would you watch a Yoda film? Let us know below!